Recently, we closed up the second launch of the Business Freedom Elevator™.

I thought it would be fun to create a debrief with you on some of the things that went well this time around and what didn’t.

If you want to know how we closed the first launch this summer with 1 million in sales, make sure to tune in to one of the previous episodes.

But let’s move ahead and look at the second launch right now and some of the dos and don’ts for our upcoming launches.

With that said, it was a great launch. I’m extremely happy. 275 people joined, generating a total revenue of 790K dollars, VAT excluded (or 655K euros).

The last time we did this in the summer, we had 375 people join. So that means we had fewer sales this time around, but we also only did it a few months after launching the previous sale.

It’s no secret I learned a lot, and I was caught by surprise by a few things which I want to share with you today.

Don’t do pre-order after Black Friday

I would never again open my pre-order doors after a Black Friday weekend sale. People were already drowning in emails from the week before about Black Friday, and especially with this day being more and more hyped internationally, I strongly advise you don’t plan any pre-orders or launches right after Black Friday .

The result: it was harder for us to cut through the noise, which will be the same for you. In the first 11 minutes, we did sell the first 28 spots, but what we noticed was that the sales died down a lot faster than previously.

Don’t launch at the beginning of January

This is another one of the lessons learned that has got to do with timing: never launch at the beginning of January.

We hosted a retreat during the launch for existing clients and for new clients in the most depressing week of January. We thought it would be lots of fun, but we quickly realized that people weren't taking action; they were frozen in spot and not going to buy stuff at that time.

February, on the other hand, is usually a more hopeful month. Now, does this mean you can’t sell in January? Not at all. I believe you can always sell if you want to. For upcoming launches, I will be using December and January to create connections online and February to March for the actual launching.

Don’t plan your launches too close to each other

From the first launch until the second launch, there was only a break of 3 months. I would never do this again.

The planning wasn’t perfect, to be honest, and now we’re looking at how we can optimize this better for the future. How can we tweak things and improve even more? Sure, we hit amazing numbers, but we can always improve.

One of the biggest mistakes we made during this launch was this: we didn’t focus our efforts enough on lead generation before the launch.

In the summer, we had a massive waitlist. Every week and the time leading up to the launch, we hyped up the program a lot. This time around, we forgot to promote the waitlist. We thought the second launch was going to be easy, and in the end, that assumption came back and slapped us in the face.

Don’t think you can get away with the minimum effort if you want to achieve the maximum. We forgot this for a second, and our list-building efforts should have been better.

Don’t forget to prime people to buy from you

Now, generally, our launch was doing well, but by the final 2 weeks we noticed something was missing. Statistically, we should have been selling more this time than last time, but what got in the way?

We picked up where we left off in the previous launch. We forgot to focus on converting the people who didn’t convert the last time.

What we should have done was starting all over with content, priming people to get ready for the program. We simply forgot to balance the two pillars of Authentic Authority.

The truth is, I had been spending lots of time with my coachees but less time on priming and educating people, sharing knowledge and showing expertise. Authority was missing.

During the last week of the launch, we decided to change up some things, and I basically got in front of a whiteboard to teach and prime people, and it worked wonders. Those few tweaks got us 100K+ extra in revenue.

Don’t rely on old tactics only

A general rule within marketing is what works now won’t keep on working. And this is something we forgot for a minute.

We thought: ‘we have an amazing podcast with lots of valuable content leading up to the BFE™️.’ But this time, it wasn’t enough. Podcast content suddenly became a baseline, and for people to step into the program, we needed more value—unique, authentic value.

So be fast, monetize what you’re doing, and pivot when needed.

Do answer questions and create FOMO

While some of our old tactics didn’t work, many of the same things did work very well.

I did a lot of live videos, but instead of doing Q&A live videos only, I went live to talk about an actual topic and answer questions afterward.

Almost everyone I was in touch with on the live video typically ended up buying.

Disappearing bonuses also went super well. Every time we had a bonus disappearing, the sales went up that day. So do remember to create FOMO (fear of missing out).

Maybe you're also interested in this: How to Regain Motivation When the Going Gets Tough

Do know your numbers and adjust quickly

Something new we did for the second launch was installing analytics everywhere, and you’ll be surprised about some of the insights you can get from these.

In the morning, we noticed that 80% of the people were checking the sales page from their desktops. In the evening, however, this shifted to people being more on their phones.

So what I did was prep a bunch of content in the morning and push it in the evening on Instagram Stories to get in front of people while browsing Instagram.

Do review your own work

Launching and running a business is like the cockpit of a plane. There are buttons working very well, but sometimes you need to push other buttons, tweak, adjust to get back on track, and get to the destination faster, better or smarter.

And to do this, you need to dare to ask for feedback from other people and review your own work.

We use our Business Elevator Lifecycle™. It’s a 7-phase framework where optimizing is one of the phases. Every time I learn something new, I add it in there.

Reviewing our work and tracking our numbers have taught us so much, so whenever you can, start tracking your numbers and keep optimizing.

Do get inside the head of your ideal client

Lastly, whether you’re launching or continuously selling, your ideal client is always key. Crawl into the head of your client.

Get inside their head to better understand them, so you can market your offer even better and ultimately close a more successful launch. Are you ready?

Watch this episode on YouTube or listen via iTunes, Spotify, or wherever you get your podcasts, and search for episode 69 of The FastForwardAmy Show.

To help you prepare for your next launch or big sales round and make it even more successful, I have created the Launch List for you. It includes all the steps and decisions you need to succeed. 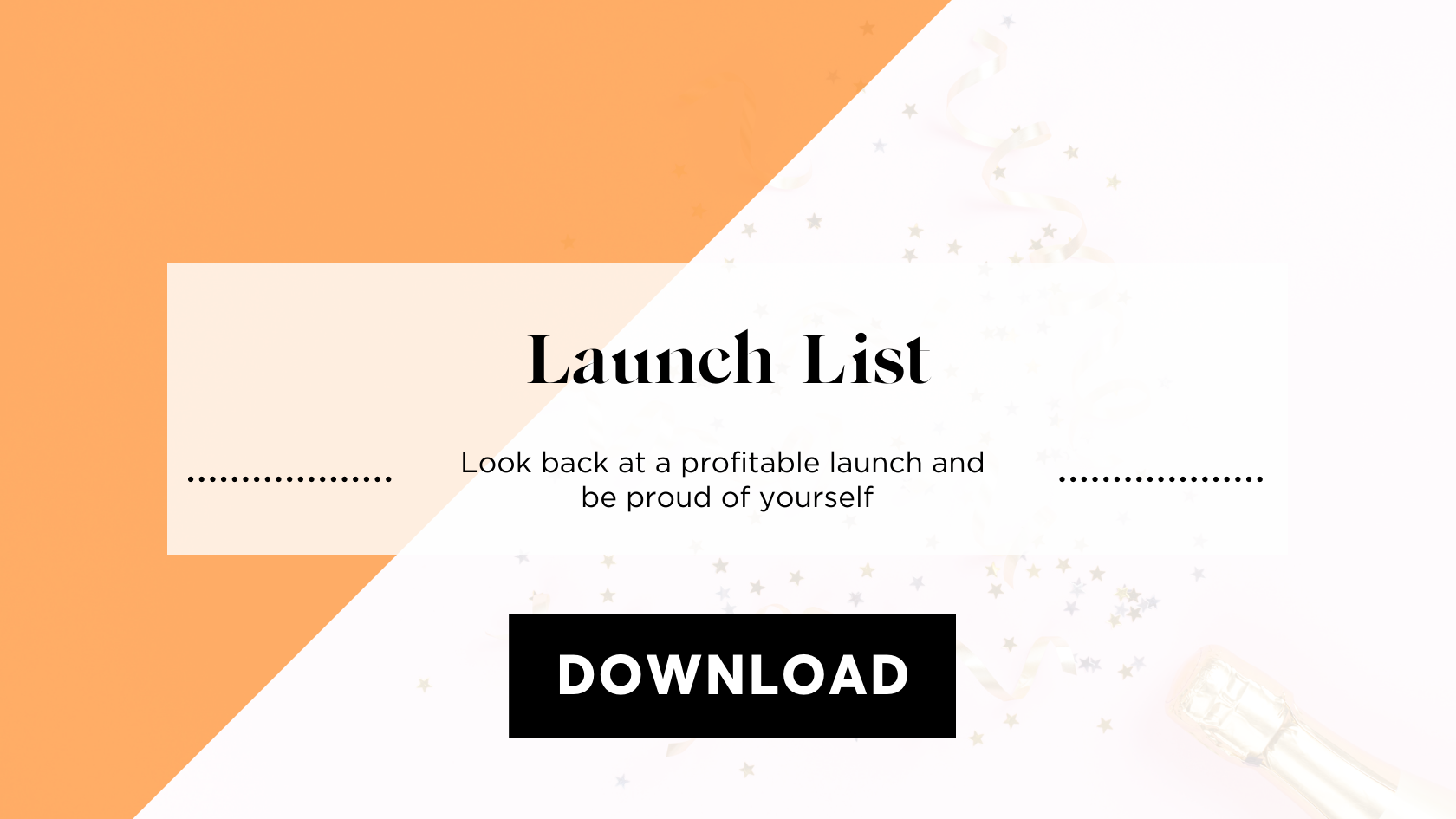