You are here: Home / Blog / How to Stop Postponing “Doing the Thing” and Beat Your Fear of Failure and Procrastination – FastForwardAmy Show Episode 21

You might think that I have my shit together. Between running multiple businesses, selling out launches, and recording a podcast, there’s a lot going on.

But what if I told you that I postponed my podcast launch TWICE? There were always reasons.

Over the years, these are things I’ve worried about – and deep down, it all comes back to the same thing. The fear of failure.

It might not be immediately obvious to you, but take a look at the reasons behind why you procrastinate. So many of my clients are ready to launch their new offering, but keep postponing by learning more, doing more tests, and watching more free webinars.

Again, it just comes down to the. Same. Damn. Thing.

We’re putting off what we really want to do, because we’re scared.

So how can we navigate this fear of failure?

It all comes down to trusting and forgiving ourselves for our past mistakes.

If you have messed up in the past, it’s no biggie. Be kind to yourself. All of that negative energy you’re putting into that past self fuckup is a WASTE. Got it? It’s like when you want to lose weight. If you keep punishing yourself for gaining weight, or if you keep hating your body, it’s not going to get better.

Focusing on the negatives doesn’t lead to a positive situation.

I’ve been there. I used to be a bit of an emotional eater, and it’s easy for people to go down the path of beating themselves up for it. But I learned that the way through that situation is to forgive yourself, and remember that you can do better the following day. There’s this little bridge that no one talks about. It starts at the day that you made a mistake, or fucked up, or had a personal failure, and takes you to the day that you just continue as if nothing happened.

That bridge that no one was talking about is called forgiveness.

If you set out to do something and then don’t do it, you might feel mad at yourself. But that’s actually counterproductive, and takes you further away from the outcome you want. When you start forgiving yourself, and start being kinder to yourself, you’re more likely to achieve your goals.

I used to have a similar situation with relationships, where I would basically sabotage them before things could progress. This kept happening, and all of a sudden, I realised that the anger and shame I was still feeling surrounding my past relationships wasn’t directed at those men. The anger and the same – the negative energy – was directed at myself.

Maybe you’ve had something similar where you feel like you’ve messed up. And that’s okay. But there is SO MUCH power inside you that will unlock itself when you forgive yourself for doing it.

A while ago, I realised that a guy I knew seemed really nice, so different to all the douchebags I used to date. I decided to ask him on a date, and we’ve pretty much been together ever since. It’s the most loving relationship and it came because I decided to get over my fear of fucking up, and just do it.

If you’ve failed in the past, feel your feelings, embrace them, and then let’s move through it.

2. Think of benefits from past failures

I’m a firm believer that every downside has an upside. You might find this difficult to believe, but every disadvantage has an opportunity.

I want you to think of benefits from past failures, like a past sales call that you messed up. Maybe that taught you what to do, and what not to do.

Or maybe you went through a rough breakup. At the time, it might have felt like the worst thing that could have happened to you. But now, you’re probably glad you didn’t end up with that person.

The third step in the process is redefining failure. We want to put other parameters on our definition of success.

Let’s say you’re applying for a position as CEO of a company. It’s kind of out of your league, but you’re such a high achiever that you think you’re only going to be successful when you become CEO.

Can we redefine this? One option would be to define success as showing up, doing the interview, and not throwing up from nerves. We could redefine it as doing the workout, not losing the weight. Obviously, these things are still a little performance-based, but it’s like the success version of taking a chill pill.

Let’s look at other things that we can measure and focus on, not the end-all, be-all thing.

You don’t always have control over the outcome.

You can learn so much from your mistakes. Focus on learning from the journey. You’ll learn so much more from doing it, than from not doing it. I want to ask you to just fucking do it.

So many people postpone growing their business. They postpone sending out newsletters or whatever. But it’s never going to feel like the perfect time. If you start in a year’s time, you’ll just have to learn then. Stop holding yourself back. You cannot skip the learning curve.

This comes from Dale Carnegie’s book How to Stop Worrying and Start Living. Whichever situation you’re in, there’s going to be a worst case scenario.

A while ago, I had a lawsuit that was really out of my hands. I didn’t do anything wrong, but it was beyond my control.

In the lawsuit, the worst case was that I would get a huge, enormous fine and a criminal record. It would also have meant I wouldn’t be able to travel to the USA for three years. Not fun. But that was the worst, worst case scenario.

So now, create your own worst case scenario, and then ACCEPT it.

And then make another list of things you would do if that worst case scenario happened.

Your final list will be what happens if you don’t do it. What if you’re so afraid of something, that you don’t even do it. Let’s say it’s an exam. You’re too afraid to take it, so you don’t get your diploma. But your worst case scenario with taking the exam is failing it, in which case you can just redo it in the summer. Which of these situations is more harmful?

You’ll always have to learn, so you might as well get started with learning NOW.

Start failing sooner, rather than later. Ask yourself what’s more harmful: doing it, or not doing it? My guess is that doing it is less harmful – because if you don’t do it, you won’t have the desired results anyway.

We want to turn stress from a threat into a challenge. Feeling zero nerves isn’t necessarily a good thing. As my dad used to say, it’s a sign that you don’t care. I still get a little nervous when recording a new podcast episode – and that means I care.

You’re going to feel fear at times, so we want to make the best of it. Let the fear fuel you. That fear of failure? Let it fuel you and help you to do the very best you can.

In my first year of university I had a mathematics course that only 9% of people passed. No one took me seriously – I was just a curly-haired girl with big earrings. But I had friends who were older, and who’d taken the course, so I knew what a problem it was. I was so afraid of failing this course, because I used to be good at math. I used that fear to FUEL me, and I worked my ass off for that course. I worked as hard for that course as for all my other courses combined… and I passed. I was one of the 9%. What shifted? The people in my class started respecting me and taking me seriously.

You have nothing to lose, so just do it. You see that quote on Instagram:

If you don’t do it, you’re going to fail anyway. So you might as well just fucking do it.

Let that fear fuel you, instead of scare you off.

There are so many quotes about being fearless. Damn, I’m scared as fuck every time I launch something. It’s not the lack of fear that will push you forwards. It’s embracing fear, and letting fear fuel you, that will turn you into a success.

Look at those nerves at excitement, not as stress. You’ll fail more than you’ll succeed, so take all that energy and let it fuel you like a damn rocket.

As Winston Churchill once said, “Success is not final, failure is not fatal: it is the courage to continue that counts.”

And as one of my mentors Sabrina Phillips says, you don’t just have one shot.

You made a sales call and someone didn’t buy? Okay, let’s do it again.

Didn’t work out? Go for a walk.

Life is not made up of one shots. It’s made up of hundreds of shots for you to take them.

Stop wasting energy on what went wrong. It’s up to you whether you stay in that negative funk, or if you’ll move forward. Learn from your mistakes, and run with it. Now it’s up to you to go and just fucking DO IT.

If you’re looking for more clarity on your life and your boundaries, I have a free video training which you can get at https://www.fastforwardamy.com/getyourshittogether. 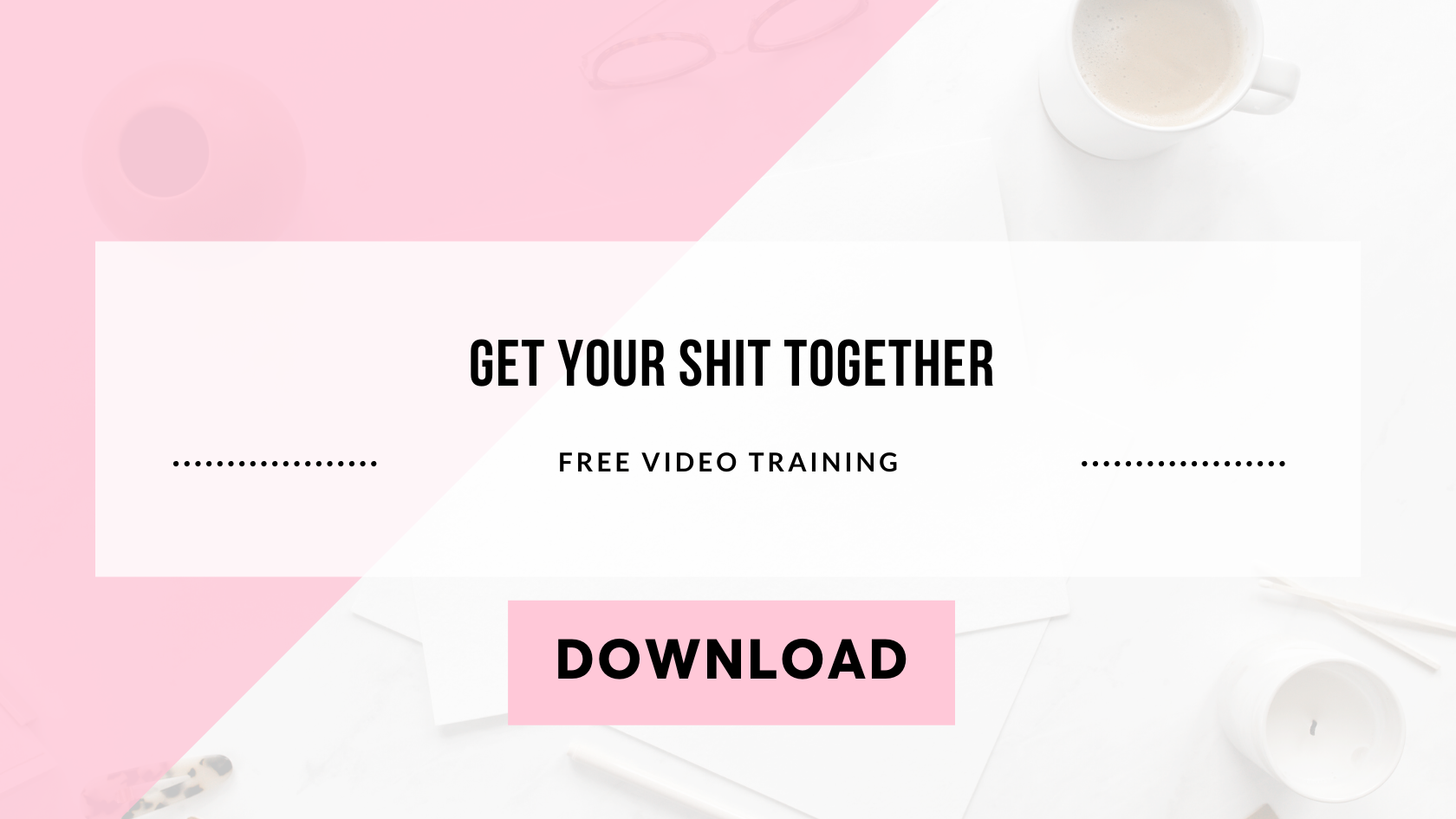